OMAHA (DTN) -- There's just no denying it, the results of the most recent DTN/The Progressive Farmer Agriculture Confidence Index are eye-popping. 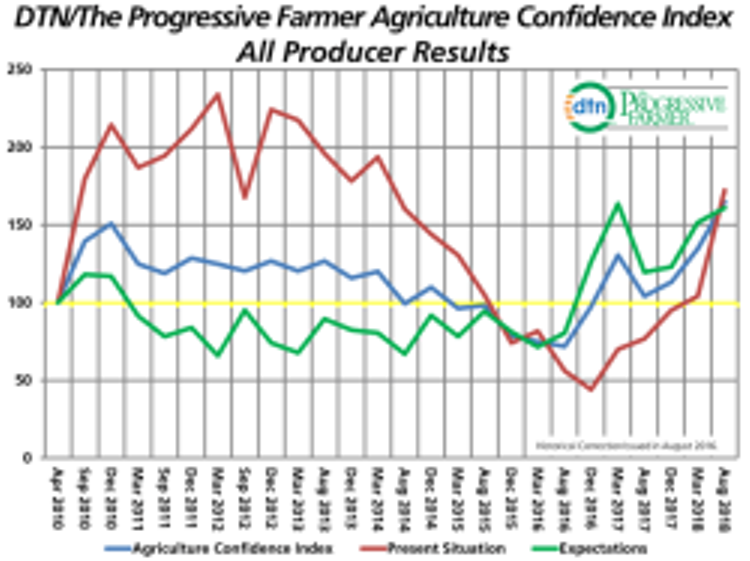 Despite increasing trade war pressures, falling soybean prices, and a general worry about what the 2018-19 grain marketing season will bring, farmers responding to the DTN/Progressive Farmer survey said they are as confident as ever, pushing the index to a record-setting 164.8.

That's exactly 30 points higher than the index of spring 2018, and 10% higher than its previous high mark, set in 2010, noted Robert Hill, economist and original designer of the ACI.

The big boost in the overall index, Hill said, comes from how farmers felt about their current business health.

Farmers responding to the telephone survey answer a series of financial and income questions that compare the present to how they expect conditions to be in the coming year. A score is given to rate their "present situation" and to their "future expectations." Those numbers are combined to create the overall Agriculture Confidence Index.

Index levels above 100 are considered optimistic compared to baseline scores when the index began; scores lower than 100 are viewed as pessimistic versus the baseline.

In this most recent survey, farmers rated their present situation at 172.4, up 68 points from spring 2018 and a whopping 100 points above what farmers said about conditions one year ago. In comparison, farmers in August 2018 set future expectations at 161.1. That's an optimistic number, but just 9 points higher than this spring and 39 points higher than pre-harvest 2017.

"So the growth comes from the present situation piece of the index, and that has more than doubled over the past 12 months," Hill said.

"These record-setting results are consistent across all regions and types of farmers studied in the survey, whether Midwest, Southeast, or Southwest, and whether crop grower or livestock producer."

This "convergence of present and future scores," showing farmers more optimistic about the present than the future, is a return to normalcy in the relationship of the two scores, he said. The relationship of those two scores had changed following the 2016 presidential election, with farmers neutral to slightly optimistic about the present, but with very high hopes for the future.

The switch back to the pre-2016 relationship indicates most farmers are satisfied with conditions as they are playing out, Hill said. That's a huge break, however, from the commentary coming from the leadership of many farm and agricultural groups and from others involved in agriculture but who are not necessarily active farmers.

"I always hear farmers are always pessimistic, but I think they are optimistic," said John Heisdorffer, who farms near Keota, Iowa, and is current president of the American Soybean Association. "Every year we stick a crop in the ground hoping it will come up and we're going to have a crop. And the same way with prices. Prices go down and we hold, optimistic they are going to go back up."

ASA leadership is concerned about the long-term implications of the current trade war.

"We have spent maybe hundreds of millions of dollars trying to get China as a trade partner with 30 to 40 years of people working on this," Heisdorffer said. "To lose any part of this, you just can't get it back."

"I got more faith maybe when the president of China comes over, maybe in November, that will trigger something," Heisdorffer said.

There are other factors that could be influencing overall farmer optimism, Hill said. One is the USDA trade disruption package that was announced ahead of this most recent ACI survey. A second is healthy, relatively clean soybean fields.

"There's been a lot of negative news around the dicamba-tolerant soybean package," Hill said. "But when you talk to farmers who've used the system, all they talk about is they finally have clean fields." While EPA has yet to rule on whether and how the herbicides that fit into the Xtend soybean trait system can be used in 2019, farmers have cleaned up a lot of weed issues, Hill said. Those fields had to be on farmers' minds as they responded to the August survey.

Since 2010, DTN has surveyed crop and livestock producers three times a year to determine opinions about their financial health. The survey of at least 500 producers is conducted in spring prior to Midwest corn and soybean planting; in August just ahead of harvest; and in mid-November, after harvest and as farmers prepare for year-end taxes and plan for the coming crop season. The current ACI survey was conducted Aug. 2-14.

A separate survey, of at least 100 agribusinesses, was conducted Aug. 6-13.

That DTN/The Progressive Farmer Agribusiness Confidence Index is also surprising, in its break from farmer optimism.

"Rural agribusinesses could be the canary in the mine regarding the impact the depressed farm economy might be having on rural communities," Hill said. "Like the farmers, they saw an improvement over the past 12 months in the present situation, but much less dramatic of an increase versus the farmer-index results." Those agribusinesses seem to have a less confident viewpoint of the present situation, he said.

But their future expectations score is 84.6, the lowest since harvest 2016, down 26 points from spring and 29.8 points below a year ago.

August traditionally is the low score of the year for the Agribusiness Confidence Index.

In terms of what the future seems to hold, rural agribusinesses don't like what they see, and sharply disagree with what the farmers are saying, Hill said.

Farmers have been tightening their belts on expenditures and investments for the past four years, the economist noted. There is only so much that an agribusiness can do to trim expenses year after year without some hope for top-line growth. This makes life difficult for rural agribusinesses and is sad news for the local economies supporting farmers.

Elevator managers made up a significant part of agribusiness survey respondents, and they are stressed about the incoming crop, particularly soybeans, said Rick Dusek, executive vice president for Country Operations, CHS.

"Farmers have to be feeling better because the yields are good, but it will be a challenge to store this whole crop," Dusek said.

CHS elevator managers have been reaching out to customers for some weeks in preparation for the big harvest, Dusek said. Part of the message, particularly in the northern areas that typically ship soybeans to ports in the Pacific Northwest and then on to China, is to be prepared to bin the beans for long-term storage and sell corn or wheat to create fall cashflow.

Long term, the soybean trade concern grows, Dusek said. With all those beans being held back, "we stand a good chance of missing our export window" for the post-harvest trade season. "When you have that kind of disruption in the supply chain, things get all backed up." That can affect what farmers plan to plant for 2019 and beyond, he said.

The next round of surveys for the Agriculture Confidence Index and Agribusiness Confidence Index will be in mid-November. Readers should also look for the next DTN/The Progressive Farmer Zogby poll, which captures farmer feelings about the political climate and their plans for the upcoming midterm elections. Those poll results will be revealed in the October issue of The Progressive Farmer magazine.